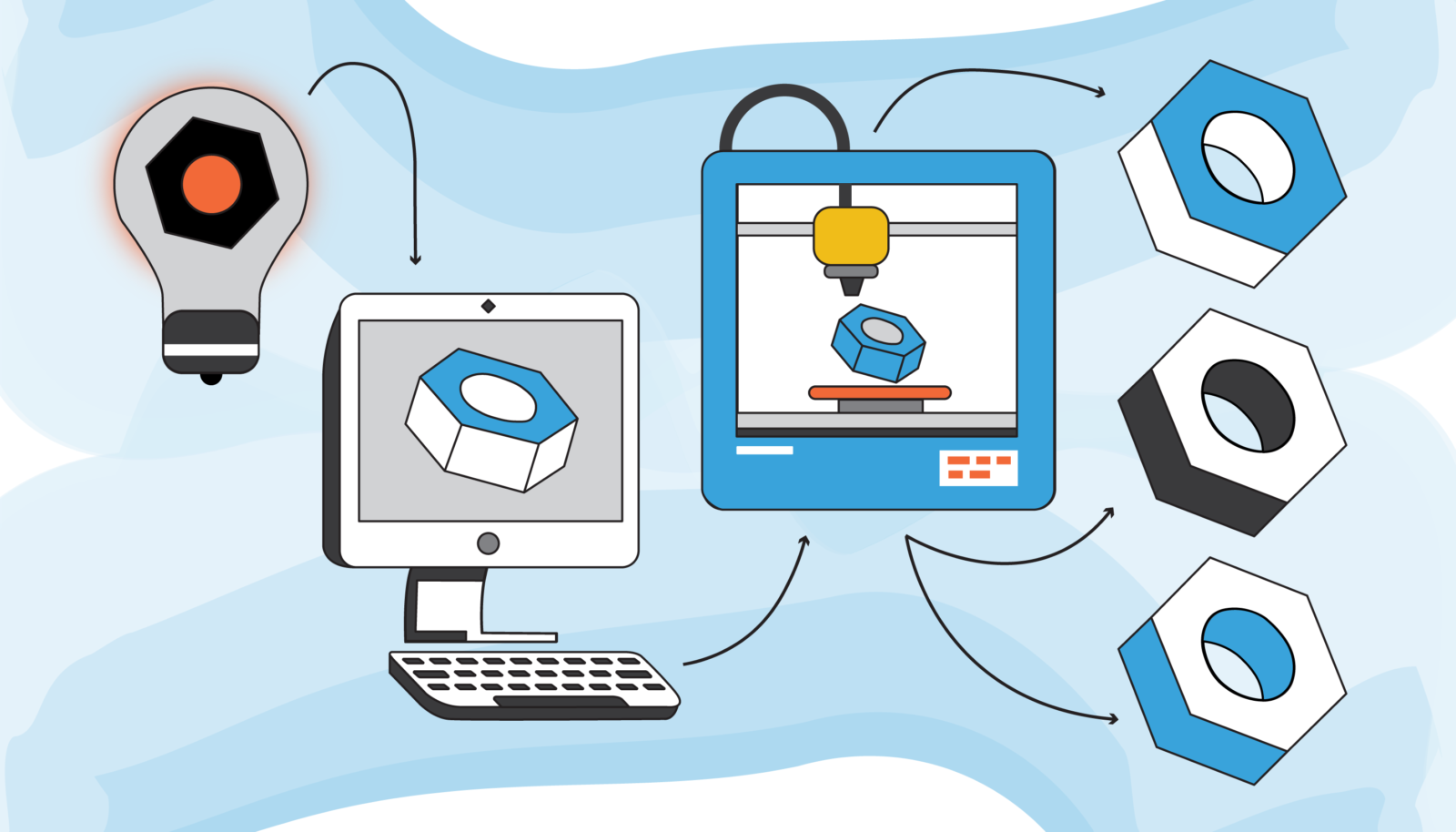 Rapid prototyping is the means to transition from design to the next steps in the production life cycle. The growth of this technique in recent years has been enormous in the manufacturing world.

To benefit everyone from prototyping beginners to experts, this post is segmented into the following topics

Rapid prototyping can be executed using other traditional machines like CNC or injection molding. These are time-intensive processes. Therefore, an alternate method like 3D printing is a great substitute.

Let’s assume your final product is an aluminum wrench. You make a fabulous design that needs to be tested before putting it through the final production. This is because, in production, there will be thousands of such pieces made every day. It would be difficult to accommodate small design changes without halting the production line. Which leads to major losses. Therefore, the wise step is to create a prototype before production. If you use traditional manufacturing again for your prototype, it will be a costly investment. This is where 3D printers come in and enable rapid prototyping with a wide variety of materials.

The advancement in 3D printing has allowed the smooth adoption of rapid prototyping for products ranging from toys to tools, from home appliances to aerospace components. It encourages us to look into the advantages of this process.

Why use rapid prototyping?

The key here is the word ‘Rapid’. Designing and prototyping take up a large chunk of time in production cycles. This is harsh on timelines and has an impact on the revenue of a business. Hence, companies are using rapid prototyping to save time and boost production at a lightning pace.

Rapid prototyping using 3D printing aims to cut down the time spent at the early stage of the product life cycle. It helps companies implement faster proof-of-concept and put in place rigorous, last-minute design changes. These reasons are substantial to justify the use of rapid prototyping.

To illustrate, we can take a popular example of Tesla Motors. Everything in Tesla Motors is planned for quicker design changes. From the factory floor plan to the place where car manufacturing takes place. In such an agile environment, rapid prototyping is a no-brainer. Any design change goes from a designers’ computer to a prototyping lab, gets tested on real hardware, and gets approved to be implemented in the production line.

There are many ways to use rapid prototyping techniques to improve the pace of production. Here are some low-hanging fruits that businesses can benefit from

Rapid prototyping allows companies to conceptualize their ideas quickly. This will help testers identify the flaws sooner. The changes are implemented on the go. It can be repeated several times to accommodate the right design until the final prototype is satisfying. Overall, there is momentum throughout the production cycle. This saves a lot of time when compared to earlier processes. These are the kind of processes you see in agile companies like SpaceX, Tesla Motors, Apple, etc.

While rapid prototyping was at first mainly used by large corporations, progressive decrease in price led to a wider adoption. Nowadays, all 3D printers in the $1000–4000 range are targeted at SMEs and entrepreneurs in need of rapid prototyping. Upper range printers are able to build multi-material fully functional prototypes in one go.

While using 3D printing for rapid prototyping, there is a lot of flexibility in terms of the material. Depending on the design and final product, you can pick the material that you want for creating the prototype. The go-to inexpensive material is plastic. There are various kinds of plastics in the market, selected based on the functionality of the end product. Earlier, prototypes made out of metals such as titanium or aluminum were expensive. There are cheaper alternatives available in the market to replace them without compromising on physical behaviors. Following are some examples for the same.

The visualization of design on paper is not sufficient to understand the advantages of the final product, or the fit it will achieve. Rapid prototyping with 3D printers allows one to create functional models. The 3D printers can generate objects that are precise and closest to the final product. We get a better understanding of the look and feel of the product. Also, it gives us a large scope for testing out the prototype in various circumstances. This generates confidence and assurance for the manufacturer before putting it through the final stages.

Mass manufacturing of goods achieves lower costs, which is where most companies compete in the market. Any change in design or technology is costly. The more time it takes to bring the change in production items, the bigger the loss. This is why rapid prototyping is essential. The designs keep changing and there is an increase in demand for customized products for individuals. Check out these amazing stories from businesses across various industries that have used rapid prototyping to solve their customer’s problems.

1. Hewlett Packard (HP) takes on the sports industry with its rapid prototyping capabilities

Using the inkjet 3D printers, HP has focused on mass manufacturing customized golf clubs and snowboards for sporting companies. HP helps the companies from designing, rapid prototyping, and testing to the production phase. They aim to produce the safest and suitable equipment for their customers in the shortest span of time.

HP is working with sporting goods companies as a partner to make an immediate, but also transformational, impact on their business. With the materials and performance our parts are bringing, we’re enabling rapid development of new products with end-user testable prototypes.

A shift in approach from a subtractive process to an additive approach allowed Volkswagen to adopt rapid prototyping which gave them flexibility within a shorter time frame. They are now able to test the prototypes by themselves. Without having to approach their suppliers.

As a result, purchasing costs were reduced (by 91% when compared to working with external suppliers), implementation time cut (by 95%), ergonomic improvements (by 28%) were made, assembly processes and quality indices improved (by 35%), and potential problems were easily anticipated at the concept stage

Volkswagen was heavily dependent on its supplier for its tools. Most of the time is spent on procurement which involves heavy paperwork and long hours of drafting quotations. A trial and error method was inefficient.

With the help of 3D printers, they began producing their own tools. They were able to create prototypes and test them for production. An in-house production chain helped them cut costs and save time.

During COVID-19, a severe shortage of PPE was felt throughout the world. Several companies sprung to action using their Rapid Prototyping abilities. One such company is RapidDirect which became a thriving force during the course of the Covid-19 pandemic. In such a time-critical situation. They were able to meet the ever-growing demand by implementing rapid prototyping services which enabled them to fast track the production of PPE kits, face masks, and other medical equipment.

The designs for the shields and other medical equipment needed clinical verification and approval. Rapid prototyping allowed RapidDirect to implement the iterative new designs for testing. With the help of 3D printing and CNC, the production of PPE and medical equipment was completed a lot quicker compared to conventional manufacturing.

Johnson Space Center in Huston, Texas has a team of engineers that use 3D printers to print the prototypes of the tools used by the astronauts at the International Space Station. Functional prototypes are first tested at NEEMO’s underwater research facility.

Duecinquanta is the name of a motorbike by Vins Motors (founders of former Ferrari Engineers). The chassis of this bike is built with carbon fiber and incredible aerodynamics with a ‘2-stroke’ engine. Above all, this was only possible due to the implementation of rapid prototyping in its manufacturing process.

I wanted to see, to touch, every single part coming off the drawing board. 3D printing made that possible

The bike has 40% fewer parts than a regular bike. The engineers began to work on the engine and the design from scratch.3D printing of various parts like, chassis body, cogwheels (rapid-prototyped) allowed visualization of the design on paper to a 3D functional model. Rapid prototyping in place enabled them to try and test various innovative design models.

Industries are always looking for opportunities to make product design cycles quicker and efficient. Rapid prototyping allows quick inception of ideas and designs. The advantages of 3D printing for your business are vast. It will allow you to: –

This is a non-exhaustive list. All the testimonials mentioned here solidify the idea of using rapid prototyping techniques in the production line across all supply chains. What makes this process worthy of adoption — it is easy, quick, and economical. Let us know through the comments if you think rapid prototyping could help boost the growth of your company.